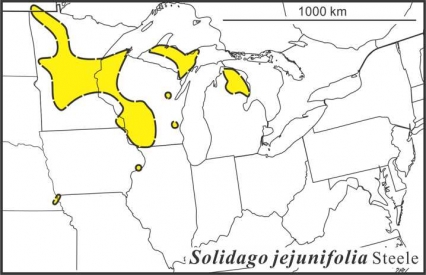 Solidago jejunifolia, or Early Goldenrod, is native to small parts of the Great Lakes and Central Plains. It grows in sandy, dry open areas, like fields, and prairies, as well as clearcuts, open woods and along roads and trails. It blooms as early as June, making it one of the earliest of the goldenrods to bloom; it has flowers on medium stalks with small petals.

There are over 100 species of Solidago in the United States, and they can be very difficult to tell apart. Solidago jejunifolia can be distinguished by its preference for sandy, acidic soil, along with its early blooming time. In the US, The plant is only known to be in small portions of Michigan, Wisconsin, Minnesota, Iowa and Nebraska. The species was broken off from previously being described as a variant of Solidago speciosa, but further studies showed it was in fact its own species. More information and comparison photos will be posted at a later time, showing similar species. But for the time being, you can access our Solidago ID chart which shows various images of over twenty species to help with ID.